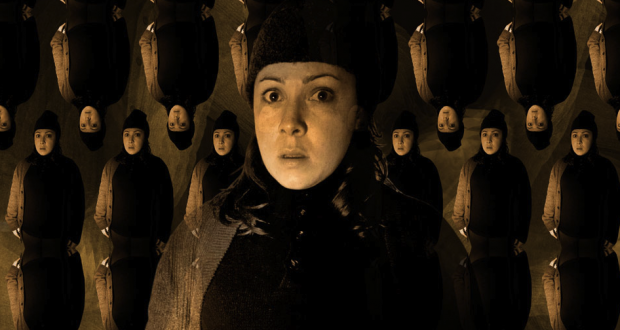 Living in her deceased grandmother’s old house Roberta (Camille Lucy Ross), known as Bobby, has recently tried to separate herself from the enmeshed relationship she inhabits with her alcoholic mother. In her attempt to do so, she has unwittingly given strength to her demonic inner child, personified as Little Bobby. Little Bobby is a mixture of self-deprecation, doubt, guilt, and grief, all rolled into a squeaky voiced imp who wreaks havoc when he comes out to play. This alter-ego of sorts also has the confidence and strength that Roberta lacks but craves, leaving her in a near constant state of awkwardness and angst. Sugary treats seem to sate Little Bobby, so Big Bobby is sure to always have some biscuits or sugary tea close by. In an effort to eventually take ownership of her life and possibly ignite a spark between herself and Bernard, the cabbage smelling, pork chop devouring, potato-headed lug she admires from afar, Big Bobby tries to work through her demons. Her unhealthy relationship with her mother needs to be exorcised and as Little Bobby becomes more malevolent and pathological he needs to be confronted too.

This is a hugely entertaining piece of theatre, being both hilarious and touching throughout. Ross’s portrayal of Big Bobby is incredibly relatable– the collective cringe of the audience is palpable at times when Bobby embarrasses herself or when her mother does the honours for her. In what must be a physically exhausting performance Ross is directed by co-writer, Kelly Shatter. Making use of all the performance space, Ross translocates to various houses and places, including a pub and a river. She also ably leaps from character to character, with hysterical outcomes, such as Mammy and Bernard, as well as the creepy Bosco-esque Little Bobby. An intense physical performance throughout- never before has a person in a wheelbarrow been funnier.

Lighting and sound work well in tandem with the performance, most effectively when Little Bobby emerges from the depths of Big Bobby’s psyche.  Momentarily the lighting can feel slightly out of kilter with the show but this doesn’t detract from the production overall. The set of a front room in a dated rural house reflects the story perfectly. Drawers hang from the surrounding walls, ideal for hiding bottles of booze or secrets. A china cabinet filled with biscuits allows other hidden shames to be put on display.  The dated décor, much like Bobby, needs an overhaul.

In what is ultimately a tale of overcoming obstacles and personal growth this very dark comedy deals aptly with issues of alcoholism, unhealthy relationships, and human fragility.  Wonderfully written, directed, and performed there is very little not to like. A must for anyone with demons (that’s everyone, right?).

Runs until September 19th as part of the Tiger Dublin Fringe