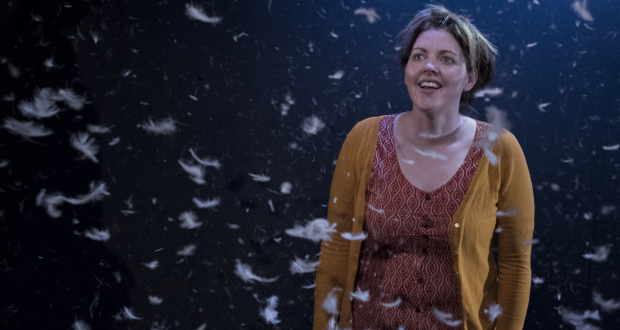 Trying to make sense of her experiences, Maisie (Siobhán Donnellan) finds herself sitting in front of Bridget at a psychic fair. Caught up in grief Maisie is willing to give anything a go if it will provide her with the comfort she craves. As Maisie struggles with her circumstances the audience become privy to the various snippets of her life that have caused her to end up in this moment.

Donnellan gives an authentic performance not only as Maisie but also as the other characters that populate this story. Directed by Aoife Connolly, the stage space is used to its fullest extent as Donnellan drifts back and forth through across this non-linear and multi-faceted performance. Donnellan’s performance as the loveable bumpkin Maisie is humorous and tender while not shying away from the underlying darkness of the story.  Written by Donnellan, the story is littered with characters that are believable and easily found in every country town.  There is an undercurrent of questioning in the script, from Maisie’s overt “Will I be alright?” to the more latent concepts of the impact of religion and mysticism (and if there is any difference between them). If solace is sought and found, then does it matter when it comes from?

Katie Davenport’s minimal set, consisting of a neatly defined stage area and a singular white chair, allows Donnellan to bounce from place to place and character to character. A white canopy hangs curiously above centre stage and comes into play with beautiful effect in the latter part of Going Spare. Lighting (Sharon Bagnall) is used strategically throughout and acts in harmony with the non-linear story.  Delicate and quirky notes act as the soundtrack to this gentle show, as well as heralding scene changes.

The inevitability of death is a central theme in this performance but despite this Going Spare is an oddly uplifting tale of a young woman searching for answers and finding hope. At just under an hour in durationGoing Spare provides an extraordinary amount of feeling and depth. This little show connects to the audience because it confronts them with the certainty of death but offers humour and hope as a temporary antidote. A touching little piece that punches well above its weight.

One thought on “Review: Going Spare”