Earlier this week I chatted to Stewart Roche about his new play Snake Eaters which previews from Nov 30th and opens on Dec 2nd at The New Theatre in Dublin’s Temple Bar. Snake Eaters is described as visceral new play about atonement, love, loss and the scars you cannot see. It tells the story of Hillis, a US Marine, who returns to Nebraska from Afghanistan and his attempt to settle back into a normal life.

What was the moment for you where you thought “I need to write about this”?

It came from a conversation that I had with Anthony Fox in The New Theatre. I had a show on there last year, Tracer, which went pretty well. It was a co-production between Purple Heart [Theatre Company] and The New Theatre. Anthony had seen a short film that was made by The Guardian about Bowe Bergdahl’s dad. Bowe Bergdahl was the only American solider captured by the Taliban in Afghanistan. We were talking about it and I wasn’t entirely sure if I wanted to write about a person who was still living and because he was literally the only American solider captured alive in Afghanistan, so I didn’t think I could just change his name or the details of the story. It was still going to be really obvious who I was writing about. I was interested in the war in Afghanistan and I had started to do some research around Bowe Bergdahl and Afghanistan and by extension I came across a piece in the New York Times which was called War Torn. It was about veterans and their struggle to slip back into daily life. One fact that fascinated me was that war veterans who subsequently committed a serious crime often had no previous criminal history, so it seemed that these incidents arrived out of nowhere. I thought it was an interesting fact that on the face of things people look like they’ve settled back into life normally but they could be a powder keg waiting to go off. There was another story from a follow up article about a soldier who had gone home to visit his wife when she was pregnant and, while there, his tank [in Afghanistan] got blown up and all his crew mates died, so he suffered from survivor’s guilt, and he killed somebody after he finished up his service in Afghanistan.  Those two facts were the starting point that I came from and it sprang from there.

Did you find it difficult to write about such an emotive topic as war and its impact?

It was certainly unusual for me as it was the first time I was commissioned to write a play, even though the subject changed slightly from the original conversation [with Anthony Fox]. To be honest, it was quite tough. It was a difficult place to go to and to get into the mind-set of, so I did a lot of research. There’s a brilliant book by Sebastian Young called War which is about an outpost in the Korengal valley. It’s really tough, bleak stuff but it’s fascinating as well. I spoke to ex-military people and they said it [dealing with war] is about the revealing of information, something that most ex-soldiers don’t want to do. Don’t get me wrong, I wasn’t in a very dark place when I was writing it but certainly in comparison to my other plays it was tougher. I think you need to do it justice so you need to have your homework done. You can’t bluff that kind of stuff. To have any kind of authenticity you need to really get in there.

There are very real issues being dealt with in Snake Eaters, such as survivor’s guilt and drug use, but what did you really want to portray?

I think with something like this I wanted it to be a journey, and not just one person’s journey. I wanted Ashley [character] to be very much involved in this as well and I think she undergoes quite a lot of changes. Ultimately there is hope for her but not so much for some of the other characters. I wanted it to be this guy’s journey and he intersects with Ashley and it becomes her journey. She starts off in a very dark place and then the two of them continue on the same path together. I wanted to explore Hillis’ [protagonist] relationship with his father as well, I wanted to have that relationship quite strong. One of my favourite scenes is the one between Don [Hillis’ father] and Ashley and I think that works really well, it’s a really gentle scene.

Ashley is the only female character in Snake Eaters. A lot of the storyline is about male relationships, whether it be friendships, comrades, father-son, or antagonistic relationships.  Did anything draw you towards that or was it due to the nature of the story?

I think it naturally presented itself and it’s funny because this would certainly be the most gender imbalanced show of mine, apart from a one man show that I did, immediately followed with a one woman show. I guess it was one of those things, as the marine world is definitely a very male world. Female marines are allowed to serve but they are not allowed to be front line troops, I think they’re changing that soon but at this stage in time they’re not. So that was a factor, and the father-son relationship was very important. It was something I was aware of and I didn’t want to deliberately limit myself but I found a lot of the story took me where it wanted to go, whereas with most of the other plays I had a fairly clear idea as to where I wanted [the story] to go before I sat down and wrote. I think it organically just happened and I guess it’s because the marine life was very much at the forefront of the story. We’ve got a female director [Caroline FitzGerald] and female designers working on Snake Eaters, so the production is hopefully balanced out.  I’m really proud of the character of Ashley. I just think it’s one of the best roles I’ve ever created, and I think I avoided the danger of creating a man’s version of a woman. She never allowed herself to be that. I’m hoping people will feel the same. 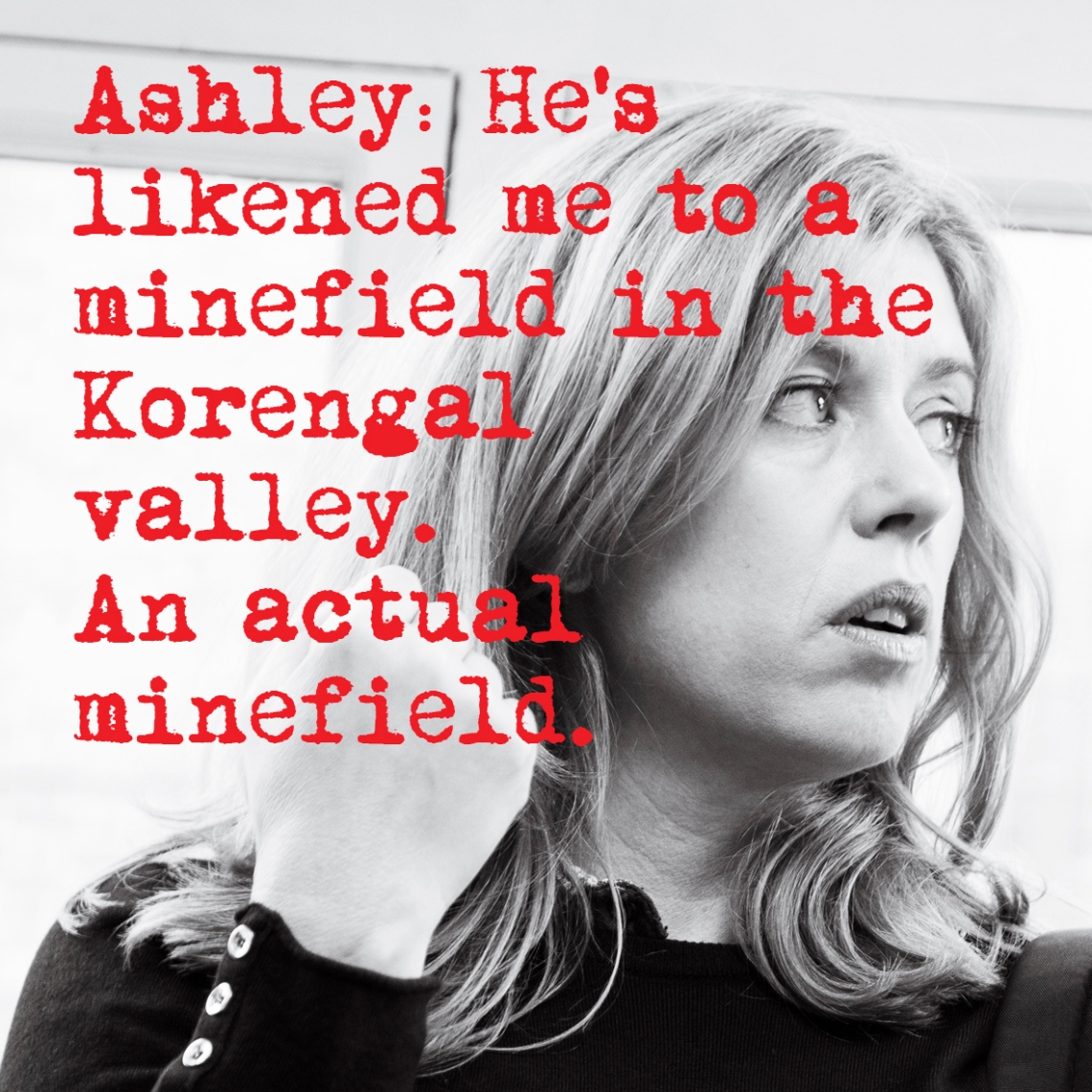 What have you learned about yourself and your writing process through working on Snake Eaters?

I usually get a first scene quite quickly and then I draw back and think about what’s going to happen. Although with the previous couple [of plays] I had a pretty good idea as to where the story was going. I wrote the first scene with Don and Hillis and I went away from it for a little while and thought about it.  And when I came back to it I found a lot of it came quite quickly up until two-thirds of the way through and then I took another step back. I’ve only been writing since 2012 and this is my fourth play so I don’t have a set pattern in regards to how I write yet. I wish I did! Then I could replicate it every time I wanted to write. This was a commission and took me a little longer as it was the one that I had to do the most research for. I’ve learnt that I need to learn a process!

Finally, you’ve a background in acting but are currently more of a writer. If you had to choose one or the other, which would you chose and why?

[thinks a lot] I would… write. I just prefer it now. I really enjoyed acting and I’ve some great memories and made some great friends, so I wouldn’t change that, but now I’m more interested in the overall picture. With acting, even in an ensemble, you are ultimately concerned with your part in it. Now I think I’m more interested in where the whole thing is going to go and the story telling aspect. I guess it’s one of those things where it’s really still quite nerve wrecking. It is difficult when it [the story] is out there for the first time but once it begins to find itself I don’t think there’s a better experience as hearing people laughing along with a script, although there might not be too much laughter for Snake Eaters.  At this stage if I had to I would absolutely go for writing, and I think I’m better at writing than acting.