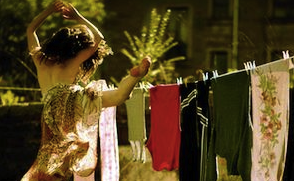 Running Blind invites the audience to find “fresh vision” and explores the role of the senses through dance, sound, and vision. Choreographed and performed by Laura Sarah Dowdall, artist-in-residence at a Dublin DeafBlind centre, Running Blind submerges the audience into a world of disrupted senses in an effort to investigate the journey that those living with altered senses undertake.

This journey began in the Banquet Hall at Smock Alley (which is doubling up as an artists’ area during the Scene + Heard Festival) where audience members were asked to draw a symbol based on how they were feeling on a card. Unfortunately the Banquet Hall experience was poorly managed, with the audience unsure of what to do or where to go. Hopefully this was intentional, as it certainly served to generate a feeling of unknowing and anxiety, which is presumably how one would feel if a sense was removed and plunged into the unknown. This section of the piece felt far too haphazard and staff seemed unsure as to what was going on (as did the artists from other shows awaiting their performances).

After this initial awkward experience, the audience were led to the top floor entrance of the Boys’ School. Here they were asked to close their eyes and use a rope as a guide to make their way down to the ground floor. Thankfully this is where Running Blind found its feet. This experiential task was equally fun and terrifying. It immediately removed a sense from the audience and cut to the chase in exploring how the world around us changes when our senses are altered. The new blindness was accompanied by the haunting sounds of the violin (Colm O’Braoin), which seemed to lure and entice the audience towards the lower depths. When the audience were finally seated in the always atmospheric Boys’ School, Dowdall made her way to the performance area using the rope in the same manner as the audience before her.

Dowdall’s performance vacillated between ecstasy and despair, and she was a visual feast in pure flowing white. Accompanied by O’Braoin, as well as what sounded like synthetic elements, Dowdall was mesmerising and hypnotic as she expressed the dichotomy of loss and gain when the senses are disrupted. The aforementioned cards from the audience were integrated into the dance performance, although to what gain is unclear. Sound (Robert Coleman) and lighting (John Gunning) were also key to this experience and contributed excellently to the overall piece. Running Blind is an intriguing performance with Dowdall and O’Braoin being above par in their respective fields. It deftly served its purpose of highlighting the impact a change in the senses can have on a person both physically and emotionally, and did so with beauty and grace.

Running Blind is part of the Scene + Heard festival at Smock Alley. It is performed as part of a duo, with both shows running back to back over 60 minutes.