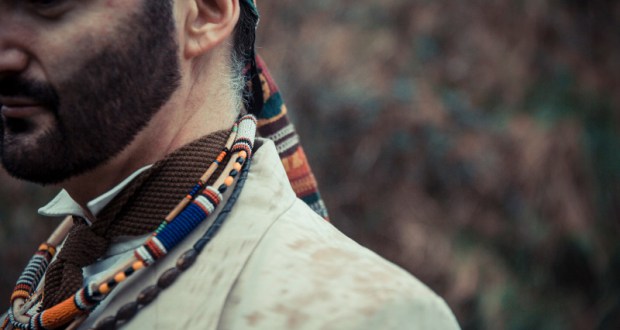 Fire & Ice Theatre Company presents McKenna’s Fort by Arnold Thomas Fanning as part of the 1916 centenary commemorations, running at The New Theatre. This one man show promises to be a re-configuration of Roger Casement for the 21st Century and follows Casement in the lead-up to the Easter Rising.

Recently back on terra firma after a five day U-boat journey from Germany, Roger Casement (Michael Bates) is without the arms and supplies he had hoped for and his passion for the upcoming Rising is lagging.  He waits alone at McKenna’s Fort on the Kerry coast as his two colleagues Monteith and Bailey go forth in search of comrades to help their plight. As the night progresses and the dawn comes Casement gets lost in his own thoughts of his escapades around the globe, and here the story of McKenna’s Fort takes flight. Casement reflects on incidents and anecdotes from his career and private life, ranging from his duties under the Crown to his dalliances in far flung places, as well as those closer to home.

In what is clearly a well researched labour of love Fanning’s passion for the subject is clear. While commendable, this does at times feel like the research is given precedence over a good story, and there are elements that remain under explored, such as Casement’s relationship with Millar Gordon. That said, the story presented on stage is none the less interesting, and thankfully has moments of humour in what can be a heavy piece of theatre. Given the existing knowledge of Casement’s fate, this is a story tainted with a sense of tragedy, in which a true humanitarian ultimately ends up unable to save himself.

Bates cannot be faulted in his performance as Casement, as well as his brief portrayal of the people that have peppered Casement’s life.  With very little in the way of props Bates ably conjures up continents, countries, and people as he travels through a world now mostly assigned to history books. Under the direction of Paul Kennedy, Bates’ acting skills are put to excellent use, as is stage and props. A simple but evocative set (Phillipa Kavanagh) serves well as multiple locations and in conjunction with lighting (Paul Doran) and sound (John Gunning) transposes the story from one place and time to the next. The pacing overall is solid and the momentum runs nicely, however due to the recurrent use of sound effects and character accents, both of which are testament to the skill of the production team and Bates’ dexterity, McKenna’s Fort feels more like a radio play on occasion.

Through his writing Fanning presents a revolutionary who is utterly human, though not wholly likeable, and therein lies the quality of McKenna’s Fort. Casement becomes a real person rather than a dusty historical figure and one who rightly deserves as much recognition as his contemporaries. This 80 minute play will be of particular interest to those with a penchant for Casement although it does run the risk of getting lost in the mire of 1916 commemorations.  McKenna’s Fort provides a good overview of the remarkable life of one of Ireland’s lesser sung heroes while not shying away from the more interesting aspects of Casement’s private life.

One thought on “Review: McKenna’s Fort”