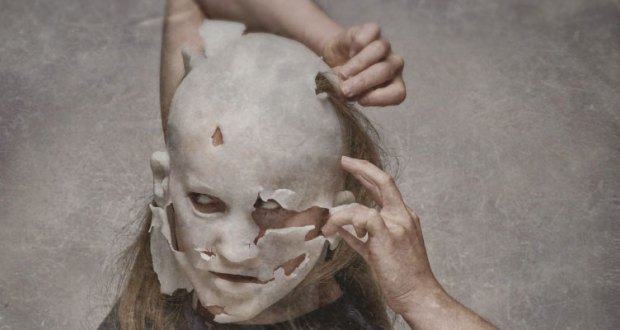 Inspired by Georgie and W.B. Yeats’ mystical approach to creativity, and taking its title from one of Yeats well know poems, The Circus Animals’ Desertion is a poetic response to the concept of nationhood. It begins in absurdity, which sets the pace for the next 70 minutes of incredible performance, and through a gamut of devices explores the impact nations and nationality has on society.

Anthropomorphic cats mix with humans, the rise of nations and the pursuit of perfection is conjured up, the young are moulded in the image of what society wants them to become. Music, song, recital, dance, video, projection; these provide the sustenance that the audience devour. This entire piece is hugely entertaining but equally profound. It challenges in the most beautiful of ways and questions the price society is willing to pay for its irrational idea of what makes a nation. No stone is left unturned as race, gender, ability, and class are all laid bare.

Much like Yeats’ original poem The Circus Animals’ Desertion is borne from a sense of frustration at what could be but remains unrealised. Nations and poetry have unlimited potential but don’t always work out as the authors would like. Contrasting Yeats’ romantic notion of nationhood against the grim realities of the world, The Circus Animals’ Desertion explores the true “rag and bone shop of the heart”, taking a step towards the psyche rather than any beating muscle. Its irony is that without one there is less appreciation for the other but the payoff might not be worth it. Through the visually stunning performances the message is relayed that in striving for societal perfection individuality is lost. Removing the degenerates from the world is only a good idea when the label is applied to others; who gets to decide?

Yeats’ own words from poetry, plays, and interviews, as well as more modern references, are interpreted through faultless dance, stunning visuals, and gravely tones accompanied by a trio of musicians. The performers are exquisite, displaying dexterity and perfect timing that appears effortless as they execute the choreography of Jessica Kennedy. The Circus Animals’ Desertion has almost unbelievable production values and really has to be seen to be appreciated. The entire show flows and is testament to the work put in by Brokentalkers, leaving Cannon and Keegan with much to be proud of.

Runs until 8 October 2016 as part of the Dublin Theatre Festival | Image: contributed

One thought on “Review: The Circus Animals’ Desertion”