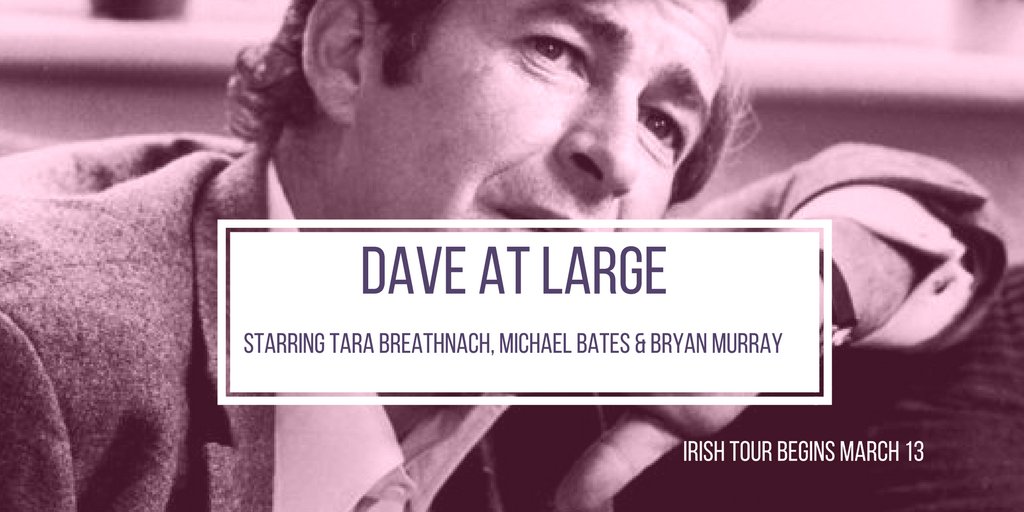 Dave At Large is a new comedy by Brian McAvera about iconic Irish comedian Dave Allen, starring Bryan Murray, Tara Breathnach, and Michael Bates. It opens on March 13th at the Civic Theatre in Tallaght, near the birthplace of Dave Allen, and then tours the country. Over four weeks it stops in Galway, Donegal, Waterford, and Wexford before returning to Dublin. I recently chatted to Bryan Murray about his portrayal of the observational comedy legend, as well as his recent work with Mel Gibson.

David Keane:
Dave Allen wasn’t really shy about discussing any topical issues, in particular his satirical look at religion and politics. Did you struggle with any of the material for Dave At Large?

Bryan Murray:
Oh no, not at all, not even slightly. We had this conversation this morning about the fact that he did [satirise the church and politicians] and looking at it from the safe confines of 2017, and looking back to the 1980s, he very bravely took on the Roman Catholic Church and its faults. He was quite precise and quite hard about them all, to be fair. Even looking at it now with the distance of time, when you put it into context he was very brave in a way. We discovered in our investigations and research into the play that his father regarded himself as an atheist and that was something that rubbed off on Dave. His schooling also led him to that; he talked about corporal punishment. Religion and debating religion was really a big part of his routine and though a lot of it was funny it was quite seriously done from his perspective. We get a lot of that into the play.

DK:
It sounds in some ways that he was probably ahead of his time in relation to his views on the church in Ireland.

BM:
He was ahead of his time in a whole lot of areas, particularly in respect to being able to call the church out on issues. Some would say that he did it from the safety of Britain, which of course he did, working on the BBC, but he was also very much a trailblazer in the whole area of what comedy was about. It’s hard for us now to think back but before him comedians really just told jokes. Dave didn’t tell jokes so much, he told stories and with his observations on religion, and sex, and Irish sexuality he transformed the whole idea of what it was at the time to be a comedian. He turned it into something that he just shared with the audience. I think that was part of his great popularity; it was a whole new way of making people laugh. The whole idea of the monologue, or his long stories, was more or less all created by Dave Allen. It’s an Irish way of doing things; we’re good storytellers.

DK:
Do you find it difficult to play a person from real life rather than a fictional character?

BM:
Not really. Having someone like Dave Allen to research, there’s so much of him online and he’s influenced so many different people in so many ways. However you do forget that, when you reach a certain age as I have, there are some people who may not know who Dave Allen is. There is a gap between the time he was at his height and now. For those people who remember Dave Allen I think there’ll be an enjoyment in the evening, maybe a re-appreciation of how good he was, and how clever he was, and how much of a ground breaker he was.

DK:
Besides your own experience and memories of Dave Allen’s comedy, what other research did you do?
BM:
They [the Allen family] were a very upper middle class family, living out in Oldbawn, but when his father died they discovered there was no money left, and that kind of thing informed him as a comedian. It’s also very important to look at Dave Allen from the point of view of being very much an Irishman making his career in the UK, being successful in the UK, and having a foot in both countries. Which is always interesting to see in people- as I’ve lived longer in London than I have in Dublin, so I’ve got an understanding of that; of what it’s like not to be living where you were born and bred and where your culture is from.

DK:
Has that informed your own characterisation of Dave?

BM:
I would just like to be able to do him justice so that when he’s looking down on us he’s not saying “Who’s that guy trying to be me?”. To honour him and do him a credit, I hope. I think people will like it. Brian McAvera has written a piece that isn’t just the comedy side of Dave, there’s also very much the inner side of him, hence there are three different ‘Daves’ on stage. There’s myself, as the TV Dave. There’s Davina (Tara Breathnach), who is the female side of his life. And then there’s Davey (Michael Bates). As well as remembering Dave’s routines, there’s also something of his background which we probably didn’t get to know as much of in the past. We share different aspects of Dave as his life progresses and as he develops. 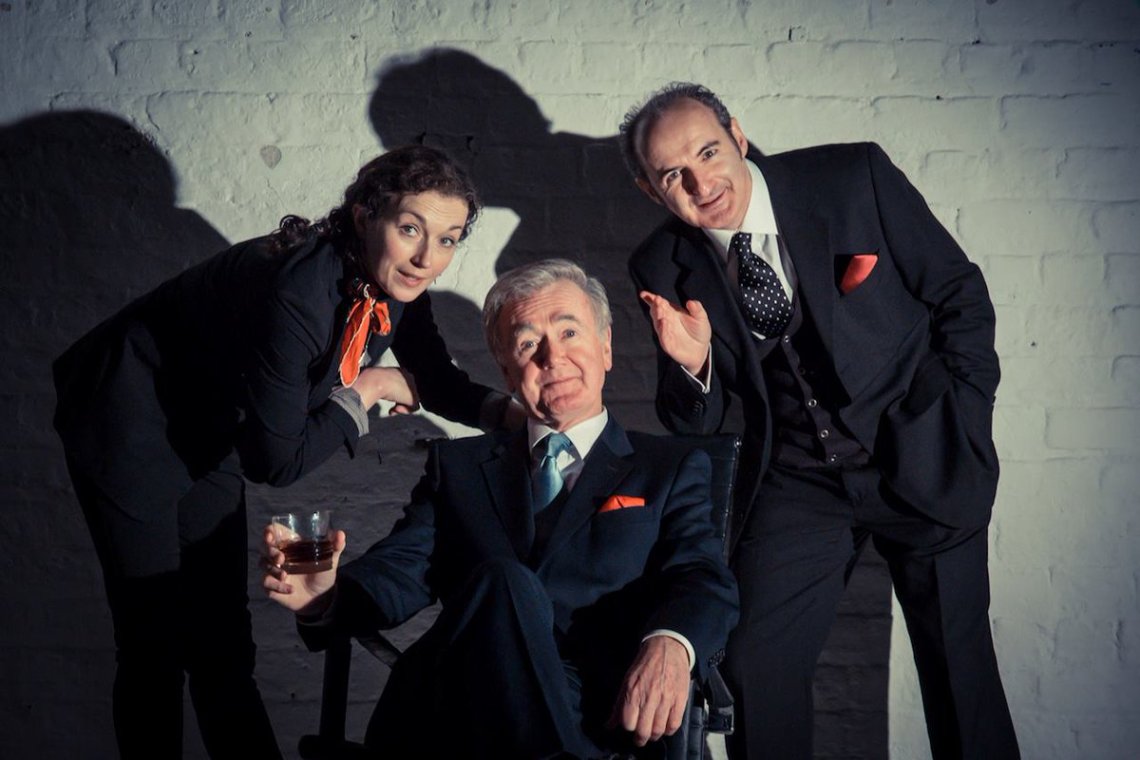 DK:
With the three of you playing the same character is there any sense of rivalry or one-upmanship in trying to portray the best ‘Dave’?

BM:
No, because the three aspects of the character as perceived and created by Brian McAvera are distinctly different and hence the reason for three actors playing the different parts of Dave. They have totally different characteristics in their own right and the three of us make up the composite of Dave Allen which is discovered over the course of the evening. I think it’ll be an interesting show in which we discover something about Dave and his background that we didn’t know of before. The man that was funny, like all of us, has his not-so-funny moments too; when life gets up and strikes you a blow.

DK:
Is there anything in particular that you enjoy about taking on the role of Dave?

BM:
I’ve always been a Dave Allen fan. Always. He’s one of the few comedians that makes me laugh out loud. Even before he said anything, you were smiling. Even with the look in his eye he invited you to step into his space and be entertained by him. It’s nice to take on that kind of a role and try to do him justice.

DK:
Being a fan of his there must be more pressure on you to give all you can to the role.

BM:
I was a fan of his to begin with. You don’t want to let him down or do anything that he wouldn’t have done or said.

DK:
In relation to other roles, you’ve recently finished filming with Mel Gibson for the upcoming film The Professor and the Madman.

BM:
It was very exciting- it’s a fantastic story. It’s about the men who created the Oxford English Dictionary. It sounds like it would be dull and academic but it’s anything but. It’s a story that couldn’t be made up. It was great to be a part of. Steve Coogan was also in it with us, as was Anthony Andrews from Brideshead Revisited. It was so nice working with those people. That’s one of the great things about being an actor; you get to do so many different things. My character, Henry Liddell, is the dean of one of the universities and he was one of the intellectuals who facilitated the development of an inventory of the English language, which is no small ask. It’s very interesting and very entertaining.

DK:
We’ve touched off the upcoming film and of course the upcoming play, Dave at Large. So onto a very difficult question: if you had to choose between being in front of the camera or being on stage, where do you think you’d go?

BM:
I’ve always wanted to be an actor. My first love is television. I love being in Fair City. I love the whole business of film making and the whole routine that you go through. I particularly like being in Fair City and I’ll tell you why; we shoot our four episodes [for the week] and then in three weeks’ time people will stop me on the street and talk to me about what happened three or four weeks ago. They’ll tell me how they wish my character hadn’t done this or that or that they didn’t like the ending of a show and will want to know more. I love the interaction with the great Irish public when you’re on the television… and then you have to go back to the theatre, to your roots, to learn how do it!

Bryan can be seen in Dave At Large, opening on March 13th in the Civic Theatre.

Presented by Directions Out Theatre Company