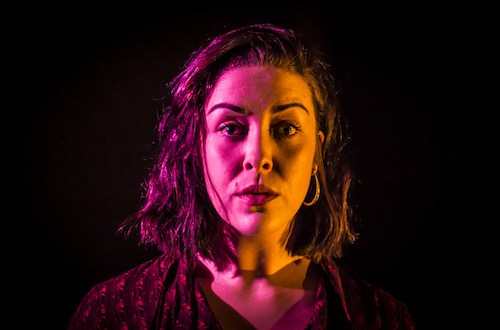 In a world that seems full of endless choices, Nell is suddenly faced with the reality that hers have become very limited. After a drunken night with friend-turned-fling Adam, a seemingly sweet but naïve garda, Nell finds herself pregnant. “Up the duff”. “A bun in the oven”. However she describes it the fact remains the same; she is pregnant but doesn’t want to be. Not just now, not just with Adam, but ever. She doesn’t want to have children, or a family, or the so-called ‘happy ever after’. She seems content with that but not everybody is.

Monster? is a powerful piece of modern theatre that is challenging but oddly fun. Aisling O’ Mara as Nell feels wholly believable and ably brings both humour and heart to the piece. O’Mara is supported by Michael Glenn Murphy as the over the over-the-top character of Ru, who is rightly played for laughs, while Jamie O’Neill in the role of a somewhat gormless Adam adds balance to the piece. O’ Mara and O’ Neill share some particularly good scenes, especially their divergent retelling of what happened the night of their fateful encounter. Emily Gillmor Murphy’s story is safe in the hands of director Karl Shiels; each role gives exactly what is needed of it and pushes to the brink but goes no further.

The realistic set (Lisa Krugel) of a somewhat gaudy party bar works well at containing the story and feels apt for this modern tale. Eoin Stapleton’s excellent lighting design punctuates key moments and adds to the overall drama and fun of this piece. With the action accompanied by a mostly instrumental soundtrack Monster? has a well-polished completeness to it.

In quite an emotive story there is plenty of humour, some of it unrestrained but much of it wry. The onstage action is interspersed with fairy tale soliloquies that, while engaging, lose some of their appeal through repetition. The idea of a happily-ever-after is used with much hilarity toward the end of this piece and serves to highlight the absurdly of a fairy tale ending, and the gullibility of those who pursue it.

Monster? poses far more questions than it answers and portrays the difficulty of not toeing the societal line when it comes be being a mother. It explores the complex place between being a daughter and being a mother while also highlighting the choices, and lack thereof, that women have in Ireland. Monster? is a stimulating 60 minutes of theatre that is well worth checking out and, beyond the laughs, is incredibly thought provoking.