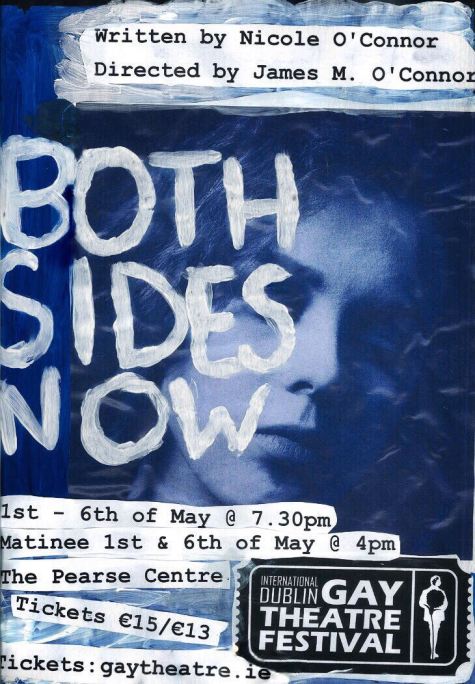 Armed with only a flipchart and a guitar Lydia (Nicole O’Connor) bares her heart and soul to the audience about her first real life relationship, not counting those imagery ones with Ellen DeGeneres or Gareth Gates. From confusion to certainty and back to confusion again, Lydia details her love for Carey through Joni Mitchell songs and old school cut-and-paste picture boards. Like any all-consuming love story, this one causes Lydia to question everything around her and ponder what love really is.

Both Sides Now begins with much humour but in a show that has been influenced by the works of Joni Mitchell it’s no surprise that there are moments of introspection and outright darkness. These moments twist the tale from light hearted fun to just beyond the brink of comfortableness. The duality of every life event is played out onstage and this theme follows through the entire piece.

O’Connor’s performance as Lydia is genuinely convincing. In a one-woman show there is no one else on stage to rely on but O’Connor needs no such support. Not only does O’Connor perform some Joni Mitchell songs but she also seems to summon, at times, Mitchell’s affable awkwardness. This feels wholly realistic and makes her “one of us”. Similarly, there are moments of palpable cringe from the audience as they identify with O’Connor’s Lydia, balanced against a collective feeling that she just needs a big hug and everything will be okay.

Besides two props and a stool there is nothing else needed on stage with O’ Connor. Under the direction of James M. O’Connor Both Sides Now is understated and causal, resulting in an accessible show that should appeal to most.

The final piece in this 40 minute show is the titular Both Sides Now and, as with much of Mitchell’s beautiful work, it serves as vehicle of reflection and odd optimism for the future. Both Sides Now is an intimate piece of new theatre that is endearing in its style and delivery. It is not perfect but benefits greatly from this and is well worth a look and a listen.

Both Sides Now runs as part of the International Dublin Gay Theatre Festival until 6 May 2017 at The Pearse Centre, Dublin.

Note: Both Sides Now is performed as part of a double bill and is paired with Wasting Paper by Squad Theatre Company. Entire running time is approximately 80 minutes.

← Review: Running With Dinosaurs
May Blog: Of Mice and Men and Mia →