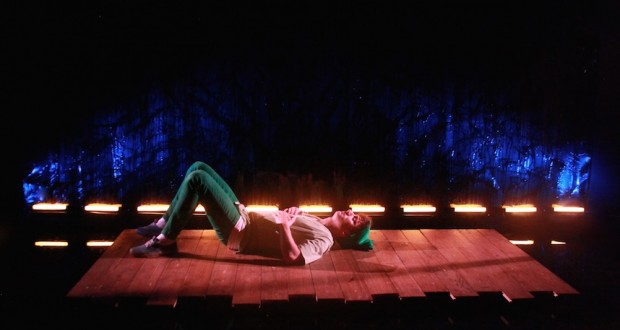 Peter Pan sits in a childlike manner aboard a raft, flicking playfully at the water surrounding him. The blackness of night envelops this scene and there is a sense of serenity. But not for long. In a quick burst of light and sound Peter, or rather, Sean (Ste Murray) bursts into life in what is the beginning of a non-stop, one-man, stream-of-consciousness performance.

Sean is preparing to go to a costume party with his girlfriend, who has insisted on them going as Peter Pan and Tinkerbell. Sean is unhappy with this choice but the reality is that he is unhappy with most things. The back story is drip fed through Sean’s interaction with his girlfriend and the other party goers, all relayed from Sean’s point of view. The conflict between what he thinks and what he says blurs at times and is mixed with his frets and fears about life in general. As the party continues Sean’s facade begins to slip and things eventually begin to unravel.

The Peter Pan metaphor of a boy unable to grow up and the struggle that this can entail follows through the entire piece. For some the process of adulthood appears to happen seamlessly; for others, like Sean, it is fraught with self-doubt and alienation. There is a sense of wanting to feel a part of it all, whilst also striving for individuality. Panned cuts close to the bone of modern society; with our basic needs met we now strive for happiness and completeness- but who said they were ours for the taking. Everyone wears a mask at times but some of us need an entire costume just to feel like we fit in, which in essence will never feel true to self.

A simple but impressive set (designed by Laura Honan) has Sean adrift on a raft-like structure, surrounded by water. Not only is this a direct nod to Pan and his lost boys but it also serves as a location point when the action transposes to the Grand Canal area of Dublin, complete with glowing red lights. It is clear that a lot of work and thought has gone into getting the set, sound, and lighting working in harmony (not to mention having a human thrown into the mix) and this has certainly paid off in a striking way. Murray’s performance, under the direction of Eoghan Carrick, feels real from beginning to end without ever being overplayed.

This beguiling little show is dark from the get-go, dealing with serious issues yet managing to keep the audience entertained and laughing. Daly’s writing and Murray’s skilful portrayal mean that this brief piece of theatre has everything the audience could possibly want. Coming in at under 60 minutes, Panned is perfectly timed with no excess or superfluous extras added on. It has that rare but perfect balance of raw performance and polished production. Go get Panned.

One thought on “Review: Panned”