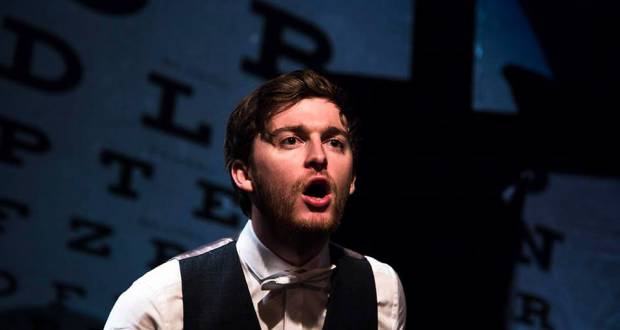 An adaptation of E.T.A Hoffman’s  19th century short story, Der Sandmann, Pygmankenstein(comprising of Lauren-Shannon Jones and Nora Kelly-Lester) present Olympia as the new writer and director in residence at The New Theatre. A portmanteau of Pygmalion and Frankenstein, it is no surprise that this theatre company have a strong focus on horror.

A young, neurotic medical student Nathaniel (Michael-David McKernan) attends a lecture of the widely acclaimed Professor Coppola (Aenne Barr), where he engages readily and impresses the professor.  Having been invited to the professor’s home to discuss his future and her work, it become clears that Professor Coppola wants more than Nathaniel’s intellect.  His fiancé’s brother, the perpetually inebriated Lothaire (Shane Robinson), has tagged along with Nathaniel and spies a lonely girl upstairs in Coppola’s house.  This girl is the titular Olympia, the obscure daughter of Coppola. For unknown reasons Nathaniel is instantly drawn to Olympia (Claudia Kinahan), much to the annoyance of Lothaire, whose allegiance lies with his sister Clara (Erin Gilgen). As Nathaniel and Olympia’s bond grows, the professor’s real life medical experiment begins to unfold.

Keeping in line with the original story, Lauren Shannon Jones and Nora Kelly Lester have created a mini gothic horror that follows in the vein of this classic genre, specifically using pseudoscience and implied fear rather than modern day scare tactics. This works very well on the small stage, partially due to the acting skills of the cast and certainly in no small part to the creative team. The misguided rouge Lothaire provides an ample supply of laughs and the other characters are not without humour.  Barr’s Professor Coppola perfectly embodies the mad scientist trope without being crass. Her position of authority and her genuine genius allow her to move freely but it is her love for her daughter that ultimately drives her deranged plan.

It is clear that the creative team have worked very well together, as the underlying tension in the piece drips out in the sound, lighting, set, and projections that are incorporated into the play. Old anatomical drawings are used to highlight Nathaniel’s specific neurosis relating to the eyes, brought about by tales from a sadistic nanny in his childhood. A similar technique is used during his fearful dreams, where the doctored projections swirl in an ethereal fashion. Dylan Tonge-Jone’s soundtrack heightens the emotions and, as in any good horror, gets the pulse racing at times. That isn’t to say that Olympia is only for horror fans. In fact it is far more fun than frightening but it holds the audience’s attention throughout its 70 minutes and provides proper gothic thrills.

← Review: Going Spare
Review: Are You There, Garth? It’s me, Margaret. →